Who is Dalai Lama? He is the head of state and spiritual leader of the Tibetan government-in-exile based in Dharamshala, India. Tibetans believe him to be the reincarnation of his predecessors. For nearly 50 years, he had aimed to establish Tibet as a self-governing, democratic state.

Dalai Lama was born on July 6, 1935, in Tibet and came to India in 1959. He calls himself the “son of India”. The Tibetan Buddhist community is celebrating the birthday of the Dalai Lama on Tuesday. The 14th Dalai Lama, Tenzin Gyatso, turned 86 today.

1. Give the ones you love wings to fly, roots to come back and reasons to stay. ― Dalai Lama

3. Time passes unhindered. When we make mistakes, we cannot turn the clock back and try again. All we can do is use the present well. ― Dalai Lama

4. We can never obtain peace in the outer world until we make peace with ourselves. ― Dalai Lama 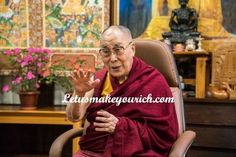 6. The goal is not to be better than the other man, but your previous self. ― Dalai Lama

7. A spoon cannot taste of the food it carries. Likewise, a foolish man cannot understand the wise man’s wisdom even if he associates with a sage. ― Dalai Lama

8. No matter what sort of difficulties, how painful the experience is, if we lose our hope, that’s our real disaster. ― Dalai Lama

9. The roots of all goodness lie in the soil of appreciation. ― Dalai Lama

Which Dalai Lama quote is the wise quotes?

11. In our struggle for freedom, truth is the only weapon we possess. ― Dalai Lama

13. The true hero is one who conquers his own anger and hatred. ― Dalai Lama

14. Choose to be optimistic, it feels better. ― Dalai Lama

15. Love and compassion are necessities, not luxuries. Without them, humanity cannot survive. ― Dalai Lama

16. Our prime purpose in this life is to help others. And if you can’t help them, at least don’t hurt them. ― Dalai Lama

17. To remain indifferent to the challenges we face is indefensible. If the goal is noble, whether or not it is realized within our lifetime is largely irrelevant. What we must do therefore is to strive and persevere and never give up. ― Dalai Lama

18. Know the rules well, so you can break them effectively. ― Dalai Lama 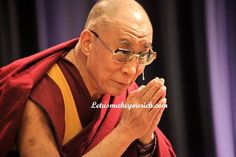 20. The ultimate source of happiness is not money and power, but warm-heartedness. ― Dalai Lama

21. Judge your success by what you had to give up in order to get it. ― Dalai Lama

22. This is my simple religion. No need for temples. No need for complicated philosophy. Your own mind, your own heart is the temple. Your philosophy is simple kindness. ― Dalai Lama

24. It is very rare or almost impossible that an event can be negative from all points of view. ― Dalai Lama